A priest for 58 years, James Cardinal Hickey served as Auxiliary Bishop of Saginaw (Michigan), rector of the Pontifical North American College in Rome and Bishop of Cleveland before Pope John Paul II appointed him Archbishop of Washington. During his two decades in Washington, Cardinal Hickey oversaw a significant expansion of social services, a renewal of Catholic elementary schools in the District of Columbia and the establishment of 16 new parishes and missions as well as two schools. He retired as Archbishop of Washington in November 2000 and died on October 24, 2004. 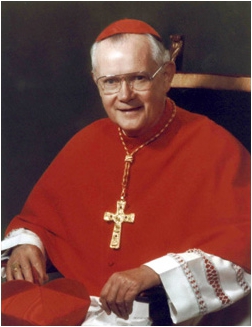 James A. Hickey was born in Midland, Michigan on October 11, 1920 to James P. and Agnes Hickey. He entered the seminary at age 13, studying at St. Joseph's Seminary and Sacred Heart Seminary College in Detroit. While still in the seminary, he was assigned to provide pastoral care to migrant workers, starting a lifetime of commitment to better the plight of immigrants. After receiving his license in theology from The Catholic University of America, James Hickey, then 25, was ordained a priest for the Diocese of Saginaw on June 15, 1946.

Father Hickey then became priest-secretary to Bishop Stephen S. Woznicki and rector of St. Paul Seminary in Saginaw. He attended the Second Vatican Council between 1962 and 1965 in the role of theological expert. In 1967, Pope Paul VI named him Auxiliary Bishop of Saginaw. In 1969, Bishop Hickey, who had a lifelong interest in vocations, became rector of the Pontifical North American College in Rome, Italy, where he oversaw the formation of seminarians from 80 U.S. dioceses.

In 1974, Bishop Hickey was named the Bishop of Cleveland, with pastoral care for nearly one million Catholics. He chose the motto, "Veritatem in caritate," or "truth in charity" for his coat of arms, a phrase that would well describe how he served the Catholic Church and broader community. In Cleveland, he became a leading advocate of racial unity in that city and became active in justice issues involving El Salvador. Just before Pope John Paul II named him Archbishop of Washington in 1980, he traveled to El Salvador to attend the funeral of the martyred Archbishop Oscar Romero. Later that year, two lay women whom Bishop Hickey had commissioned to serve as missionaries in El Salvador were murdered. He kept their photographs on the wall of his private chapel for the rest of his life, and called for an end to military aid to that nation.

James Hickey was installed as Archbishop on August 5, 1980 at the Cathedral of St. Matthew. Eight years later, on June 28, 1988, Pope John Paul II elevated him to the College of Cardinals.

During his two decades as archbishop, Catholic Charities of the Archdiocese of Washington became the region's largest private social service agency, serving 80,000 people each year. The Spanish Catholic Center provided social services and legal and medical assistance to 36,000 people annually by the time the Cardinal stepped down. Programs started under his leadership included the Archdiocesan Health Care Network and Archdiocesan Legal Network, which provide millions of dollars in pro bono care for the region's low income residents; Birthing and Care, which provides pre-natal, delivery and post-natal medical care and other support to women in financial need; and Faith in the City, an initiative to revitalize inner-city Catholic elementary schools through new resources and partnerships with the business community.

To serve the region's growing elderly population, Victory Housing, a non-profit agency that develops assisted and independent living for senior citizens and affordable family housing, was started. With Mother Teresa, he dedicated the Gift of Peace Convent, where the Missionaries of Charity care for the homeless and terminally ill, including those with AIDS, as well as two other programs with the Missionaries of Charity. In 2001, Cardinal Hickey's special love for those in need was recognized when Catholic Charities' named its new downtown headquarters, at 924 G Street, NW, the James Cardinal Hickey Center.

Under his leadership, adult religious education and faith formation flourished; thousands of parishioners participated in classes and faith-sharing groups. Cardinal Hickey published pastoral letters on nuclear weapons (1982), the sacrament of penance (1984), the Eucharist (1984), substance abuse (1989), evangelization in the schools (1993), young Catholics (1993), care of the sick and dying (1993, with the other bishops of Maryland) and on the Catechism of the Catholic Church (1994), as well as a major document on combating racism (1991). Over 30,000 total people participated in an Archdiocesan Convocation (1998) and an October 2000 Eucharistic Congress to mark the Jubilee of Christ's birth. The Cardinal also played an integral role in establishing the Council for Major Superiors of Women Religious. He received the Pope Pius XI Award (1993) and Karski Award (2000) from the Anti-Defamation League for his efforts to strengthen relationships between Catholics and Jews, and the Gaudium et Spes award, the highest honor given by the Knights of Columbus.

He established 12 parishes, four pastoral missions and two schools, including the Cardinal Hickey Academy in Dunkirk, as part of the Archdiocese's largest building boom since the post-World War II era. At the time of his retirement, the Archdiocese of Washington had become a diverse community, with Mass offered in 25 languages, and 140 parishes and 106 schools serving more than 510,000 Catholics in the District of Columbia and Montgomery, Prince George's, Calvert, Charles and St. Mary's Counties.

Roles with the Vatican and Bishops' Conference

How He will be Remembered

When asked 15 years ago by a Washington Post reporter how he would like to be remembered, Cardinal Hickey told her, "First, I'd like them to say he was always loyal to his church. Second, that he was a friend to Catholic education. And third, if they don't want to say the first two, at least I would hope they would chisel on the stone, 'He served the poor.'"

James Cardinal Hickey will be remembered for all of this and more. 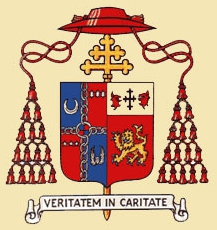 Cardinal Hickey's motto, displayed at the foot of the devoice, is "veritatem in caritate", truth in charity. As in all cardinalitial coats of arms, a pontifical hat called a "Galero" is placed above the central device and a cross is at the rear. The Galero is low-crowned, flat and wide-brimmed. It is scarlet in color. Suspended from it, on either side of the central section, are fifteen tassels, five more than are used on an archiepiscopal coat of arms, and nine more than appear in the insignia of a bishop.

The central section of the coat of arms is divided longitudinally into two halves. Facing it, the left half (called the dexter impalement) depicts the Archdiocese of Washington. Its symbolism is drawn from the Archdiocesan coat of arms devised by William J.F. Ryan of New York in December 1947.

The right half is personal to the prelate. It too was devised by Mr. Ryan in March 1967 and modified in 1980.

The left half is surmounted by a cross of chains, united by a central link. Red, white and blue are the colors. The symbols suggest that the Archdiocese centers on the capital of the American nation, a country of states bound together by a central administration.

The left impalement has four quarters. The blue upper left quarter features a silver crescent, a traditional symbol of the Blessed Virgin Mary. Under the title of the Immaculate Conception, Mary is considered by Catholics to be the patroness of the United States.

The other upper quarter, on the right, is in red. There are three six-pointed silver stars. These have been taken from the Arms of Pius VI who was Pope from 1775 to 1799, reigning at the time of the American Declaration of Independence.

The lower left quarter, also in red, has three five-pointed stars, adapted from the Arms of George Washington.

The final quarter, in blue, features a winged man's head, an ancient symbol for St. Matthew the Evangelist for whom the Washington Catholic Cathedral is named.

The right half of the device, the personal one of the prelate, is red with an upper section in silver. These are the colors of the Arms of the Diocese of Saginaw, Michigan. The reference is to the twenty-two years during which the Michigan-born James Hickey served as a priest of the Saginaw diocese, from 1946 to 1968, first as newly ordained, and finally as Auxiliary Bishop.

The right half of the shield (the "sinister impalement") is divided into two sections. The shorter upper part features two griffins facing one another on either side of a black "cross crosslet" (a cross whose extremeties terminate in crosses). The griffins' heads, in red are drawn from the Arms of branches of the Ryan family. The reference is to the prelate's mother. Her maiden name was Agnes Ryan. The cross crosslet was taken from the arms of Lord Cleveland, a reminder of the prelate's tenure as Bishop Cleveland, Ohio, 1973-1980.

Dominating the lower part of the right impalement is a golden lion, a feature of Arms of branches of the Hickey family.

After the original work of the Hickey and Washington coats of arms was done by William J.F. Ryan, the combination of the two was accomplished in June 1980 by Anthony W.C. Phelps of Cleveland.